It's this time of year again...

It's this time of year again...

the Cutest Anime Girl contest of 2008 is coming! As usual we're going to start sending press releases and collecting submissions of Sakura(r)-cutenesscompatible(tm) anime girl's from 15th to 30th November. Voting will start at 1st December and continue until christmas evening, 24th Dec 2008 at 6pm CET.

Here is the Voting booth in DEMO MODE

Information how to submit your girl(s) is at the CAG Main Page.

The rules are the same as always. Registered members can vote for one girl only, their vote will count 24 times an anonymous visitors vote. Unregistered anonymous voters can vote once per 24 hours for 24 days, each vote counts 1 vote. So registering will only allow you to give all your votes at once.

Any questions?
What do you call a dinosaur with an extended vocabulary? A thesaurus.
Top

I doubt I'll submit or be able to vote. Have fun minna!
“Here’s the thing… I’ve already gone crazy once. I know what my limits are.” ~ Bella Swan
Top

It's your decision I really wonder why you're making this statement.

I'm really confused it looks like you do not care anymore, which is fine - but there really is no reason for staying here if you feel uncomfortable (not that you're around anyways.)

Also saying "I doubt I'll be able to [...] vote" possibly implies that I will take appropriate measures to prevent you from voting which is very rude. Or alternatively, logging on and casting your vote is too much work for you?

I'm confident the election will happen anyways, most of the voters come from Noated and other sites just for a vote or two.
What do you call a dinosaur with an extended vocabulary? A thesaurus.
Top

You don't need to interpret what I said that way. I wouldn't be able to vote because I'm banned from the internet. I can only go on when I'm at school and I have class when I am at school. Besides, if I didn't care at all then why would I check in? I just didn't think you'd appreciate another introduction thread

“Here’s the thing… I’ve already gone crazy once. I know what my limits are.” ~ Bella Swan
Top

I'll see if I can find cute anime girls

But I'm not sure whether I can. But I'll definately vote!

I'll count on Oldwrench... Akari Kamigishi is out of question.

Being banned from the internet sounds weird how did that happen? You're not french are you?

I could think of a "vote by mail" service (unless you're banned from Email too) if you manage to see and decide for a girl you do not need to log on and you can also use https://www.allanime.org/ which encrypts the connection so no filter at your school will work. Unfortunately we didn't buy a certificate so you might encounter errors or warning messages which you can safely ignore. Hope this helps to allow your voting.

Wish you will get you internet pretty soon.
What do you call a dinosaur with an extended vocabulary? A thesaurus.
Top

Oh, I'll come up with something. I just have to find some cute girls again. ........ Leilani doesn't count I guess.

Hi Freya, I'm glad we got to hear from you. I assume you mean your parents have banned you from using the internet. Naughty girl!!..... Well, parents can be tough at times, mostly they try to do it for your own good though. Hope you can get back on the net again soon. And stop by more often if you can, I like to hear from you.


(I know it wasn't a joke oldwrench!)
Top

I'll look today for some pictures (since I have nothing else to do anyway I might as well take a look..)

Now there would be a contest....... Each of you find an anime girl picture that you think looks the most like you, and we could pick the cutest. 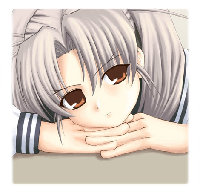 Dogs have owners, Cats have staff

Some mistakes are too much fun to only make once.
Top
Post Reply
32 posts